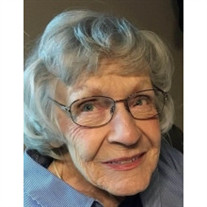 Alice "Sue" Mertes, 97, of North Aurora, passed away peacefully September 4, 2020, in the presence of her daughters. She was born October 11, 1922 in Aurora to Alice and Arthur Blankenhagen. Sue attended West Aurora schools graduating from West High in 1940. She married Kenneth Mertes in May, 1943 and continued to live in Aurora after Kenny's return from overseas duty in WWII. During WWII, Sue helped the war effort by working at Lyon Metal and developed a system to make data processing operate more efficiently. As a homemaker, she became involved in the PTA and became a Girl Scout leader. Throughout her life, Sue cared for others including her mother and her father-in-law. Her greatest joy was in spending time with her family. She is survived by her beloved family, Pamela (Richard) Monaco, Patrice (Mark) Olinger, grandchildren, Rebecca (Angelos) Drake, Michael (Amanda) Monaco, Erin (Brendan) Seyring, Andrew (Amy) Olinger and great grandsons Tyler Drake, Michael (MJ) Monaco, Mason Monaco, and Bennett Seyring. Also survived by nieces, Janet Richardson, Linda Schubel, Jeanne Carlock, Joy Wheeler, Judy Gilmour, and nephews, Ted Blankenhagen and Albert Garreau, and many special neighbors and friends. Sue was preceded in death by her husband, Kenneth; brothers, Edwin (Helen) Blankenhagen and Duane (Lois) Blankenhagen, nephew, Arthur (Pat) Blankenhagen and niece, Judy Holland. A special thank you to Assisting Hands in Batavia and BRIA of Geneva and their caring staff for making her feel a special love during her last months. Contributions can be made in Sue's memory to the charity of the donor's choice. Due to the current Corona virus pandemic, a memorial service will be held a later time. THE DALEIDEN MORTUARY, 220 N. Lake Street, Aurora is serving the family. Please visit our website at www.daleidenmortuary.com where you may leave condolences for Sue's family.

Alice "Sue" Mertes, 97, of North Aurora, passed away peacefully September 4, 2020, in the presence of her daughters. She was born October 11, 1922 in Aurora to Alice and Arthur Blankenhagen. Sue attended West Aurora schools graduating from... View Obituary & Service Information

The family of Alice "Sue" Mertes created this Life Tributes page to make it easy to share your memories.

Send flowers to the Mertes family.