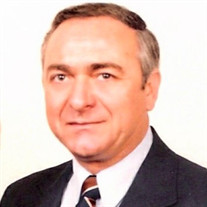 Alden P. Kilian, 87, died at his home in Sugar Grove, IL, surrounded by the loving prayers of his wife, his children and their spouses, and his beloved grandchildren and great grandchildren. Alden’s life reflected his deep faith in God, his love for his family, and fulfilling all his commitments to family and others. He was born in Scales Mound, IL to Ella and Byron Kilian. Alden served in the Illinois Farm Bureau family for over 45 years, the last 18 of which were in Cook County as manager. During his tenure in Cook, the membership grew from 7,000 to 27,000 becoming the largest county Farm Bureau in the nation. These exceptional management skills and dedication were recognized as he retired in 1999 with a special recognition banquet before leaders, friends, and much of the Kilian family. WGN’s Orion Samuelson served as Master of Ceremonies providing much levity. Alden served as a founding board member of Waubonsee Community College, established 1966, and served as an executive board member of the Two Rivers Council, Boy Scouts of America. He served on the Kane County Fair Association board, moving the location to Randall Road. He is a life member of the Veritas Society, Rosary High School, and a life member of the Abbott Marmion Society, Marmion Academy. He is an honorary fourth degree member of the Knights of Columbus. Alden is survived by his beloved wife and partner, Betty, and would have celebrated 69 years of marriage on September 9 of this year. He is also survived by his children Thomas J. (Susan) Kilian of Gotha, FL, Catherine (Donald) Brummel of Sugar Grove, IL, Theresa (John) Bowen of Aurora, IL, Patricia (Wesley) Haskell of Lilburn, GA, Susan (Donald) Damato of Aurora, IL, Clifford (Cathy) Kilian of Mason, OH, and John (Sherri) Kilian of Arvada, CO; twenty-five grandchildren; and forty-one great-grandchildren. He is also survived by a sister, Darleen Smith, and many nieces and nephews. He was preceded in death by his parents, two brothers and one sister, and his beloved baby, Joseph Patrick. Visitation will be Friday, September 6, 2019 from 3:30pm until 7:00pm with The Rosary at 3:30pm at The Daleiden Mortuary, 220 N. Lake Street, Aurora, IL. 60506. Funeral services will be Saturday, September 7, 2019, beginning at 11:30 am at THE DALEIDEN MORTUARY where we will process to Annunciation Church for a concelebrated funeral mass which will be offered by Fr. Patrick Gillmeyer, O.S.B. and Fr. Charles Reichenbacher, O.S.B. at 12:00 noon. Interment will follow at Marywood Cemetery. Memorial contributions in Alden’s memory made to either Marmion Academy, 1000 Butterfield Rd, Aurora, IL 60502 or to Rosary High School, 901 N Edgelawn Dr, Aurora, IL 60506, would be appreciated.

Alden P. Kilian, 87, died at his home in Sugar Grove, IL, surrounded by the loving prayers of his wife, his children and their spouses, and his beloved grandchildren and great grandchildren. Alden&#8217;s life reflected his deep faith in God,... View Obituary & Service Information

The family of Alden P. Kilian created this Life Tributes page to make it easy to share your memories.

Send flowers to the Kilian family.