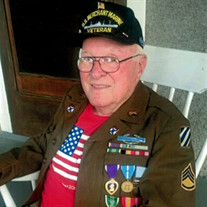 Albert Cinto, Sr., 92, of Aurora, passed away Friday, March 8, 2019 in Aurora, IL. He was born February 5, 1927 in Aurora, IL. Al was a lifelong resident of Aurora and a veteran of two wars with two branches of service. He was a railroad man who worked for the Burlington Railroad for 48 years. While working at the railroad, he was interrupted twice by service to his country. Albert served in the Merchant Marines during WWII. He also served in the United States Army during the Korean War and received double Purple Hearts. Albert was a long time member of St. George Church and very active at the St. George Church Citizen’s Club functions. He loved to travel and was an avid deer hunter. Al was also a member of Amvets, Lucky 50, the Phoenix Club, and a lifetime member of the V.F.W. in Montgomery, IL. He loved attending the Fox Valley Veterans Breakfast Club and in the past, was Veteran of the Month. He is survived by 7 children, Albert (Mary) Cinto, Jr. of Galena, Mark (Mary Ann) Thayer of Aurora, Kathy (Frank) Barilla of Newark, Robert (Janice) Cinto of Oswego, Susan (Robert) Argenta of Ann Arbor, MI, John (Peggy) Thayer of Aurora, and Timothy (Karen) Cinto of Sugar Grove; 13 grandchildren; 8 great grandchildren; two sisters Jean (Donald) Flynn of Sugar Grove and Martha (Salvador) Padilla of Montgomery; his special cousin Rose Juneau of Aurora; and many nieces and nephews. He was preceded in death by his first wife Marguerite (Ahrens) Cinto; his second wife Julia Eileen (Schoenfielder) Cinto; his infant son Thomas Cinto; his parents Flora (Matyas) and George Cinto; his sister Viola Bussen; and two brothers George and Ronald Cinto. Funeral from THE DALEIDEN MORTUARY will be held Thursday, March 14, 2019 at 9:30am to St. George Church at 10:00am. Fr. Frederick Peterson, OSB will officiate with interment at Lincoln Memorial Park. Visitation will be held Wednesday, March 13, 2019 from 2:00pm until 7:00pm with a liturgical wake service at 4:00pm at THE DALEIDEN MORTUARY, 220 N. Lake St., Aurora, 630-631-5500. Please visit our interactive website at www.daleidenmortuary.com where you may leave condolences for Albert’s family. Memorial contributions may be made in Albert’s memory to St. George Church.

Albert Cinto, Sr., 92, of Aurora, passed away Friday, March 8, 2019 in Aurora, IL. He was born February 5, 1927 in Aurora, IL. Al was a lifelong resident of Aurora and a veteran of two wars with two branches of service. He was a railroad man... View Obituary & Service Information

The family of Albert Cinto, Sr. created this Life Tributes page to make it easy to share your memories.

Send flowers to the Cinto, family.