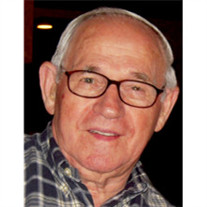 Adam Seifert lived life on his own terms. He was born in Mucsi, Hungary, on Jan. 29, 1929. He went on to marry his forever-sweetheart, Gisela Erb, on Sept. 15, 1951, in Germany. Shortly after, Adam set out for a better life in America with Gisela, leaving behind their country devastated by WWII. Here, through his work, family and happiness, he would represent the true American dream. After settling in Aurora, Ill., he and Gisela became American citizens. During this time, he was also drafted into the Army and served at Fort Bragg, N.C., where he'd proudly serve his beloved country for two years. Back in Aurora, he worked as an assembler at Aurora Pump for 34 years, where not only would he make wonderful friends, but would play an extra in the film Let's Get Harry. This, with so many of his fond experiences, led to lifelong storytelling of his many "Pump" memories that his whole family would come to know. In 1994, he began enjoying a well-earned retirement. He loved his family more than life itself. He sat on countless creaky bleachers in gymnasiums all over Illinois watching his children and grandchildren and great grandchildren with pride, cheering them on, no matter what the outcome. He was an avid gardener, offering fresh vegetables and fruits to anyone who came by. He loved bowling with his friends out at Parkside-and had quite the impressive form. He loved dogs. In dogs, he recognized the unconditional love and kindness few humans are capable of. He saw in them a spirit to envy, and a vulnerability to learn from. George, Roxie, Lucy, Maggie, Peyton, Tex, Alvy, Hank, Angel-just a few of the many dogs he loved throughout his life, and who really loved him. He loved the Cubs and the Bulls, cheering on all the Chicago hometown teams, and talking about players as if they were his own sons. And he reveled in the 2016 World Series victory after 64 years of waiting, though never wavering as tortured Cubs fans can often do. As a member of Annunciation Church for 35 years, he was a man of great faith. In a world full of judgement, Adam celebrated all the joy and wins, big or small, of the ones he loved. In death, he now joins many loved ones who have also passed, including his parents, Adam and Teresa (Firle) Seifert, his son Helmut, his sisters Anna Maria Faupl and her husband John, Julia Ban and her husband Leslie, and Elisabeth Seifert. He leaves behind his loving wife Gisela. His daughter-in-law Sandy Seifert. His daughter Elizabeth Searles and husband Nelson, his grandchildren, Melissa Kennemer and her husband Kyle, Heidi Johnstone and her husband Mike, Anna Seifert, Nicholas Searles and Bradley Searles and his wife Jessica. And his great grandchildren: Ethan, Adam, Noah and Lola. His life ended just as it began in America-loved by many, supported by all, and finally, home at last. There will be a private graveside service. A Celebration of Life Mass will be held later. In lieu of flowers, donations can be made in his name and honor at savethechildren.org.

Adam Seifert lived life on his own terms. He was born in Mucsi, Hungary, on Jan. 29, 1929. He went on to marry his forever-sweetheart, Gisela Erb, on Sept. 15, 1951, in Germany. Shortly after, Adam set out for a better life in America with Gisela,... View Obituary & Service Information

The family of Adam Seifert created this Life Tributes page to make it easy to share your memories.

Adam Seifert lived life on his own terms. He was born in Mucsi,...

Send flowers to the Seifert family.